Note: This was published in a rush, and needs some tidying. Expect some cosmetic/spellign fixes over time

So, I’m sitting at DemoCamp ’09 in the Imperial Pub on Dundas. Right now. And I’m just going to shotgun my impressions, and what’s going on here.

Now on to the presentations:

There are two guys on stage right now who are presenting something called “BackType”. Essentially, it looks like a web application that allows you to search and sort comments on social media sites such as Digg, Reddit, WordPress, etc. Hmmm….apparently, they’re also planning on releasing a plug-in for WordPress that will allow your comments to be submitted automatically. Nice. Kind of lackluster presentation, but an interesting idea.

Woop – they just got quizzed on the business model, and the crowd laughs. “Making money isn’t a huge priority for us”, is the response. Alright.  Though apparently, they’re making money through their API somehow…not sure how.

Social media?  Some companies are going for it.

Tim O’Reilly called this “the next big thing on the internet”.

It’s a CRM (Customer Relationship Management) tool.  Tool scours the web looking for information on who you’re interested in, through social media, etc.  Rates them on their “strength” as a customer, “opportunity”, etc.  Tracks sales, opportunities, more…

Maybe I’m missing something, but as a consumer, this sounds kind of creepy.  I see a couple of business folk licking their chops.  *shudder*.

Actually, it sounds like this is for smaller businesses, with large numbers of regular customers.  That’s not so bad.

It’s a tool for the individual – your profile exists even if you leave your current company.  This means that if you’re looking for a job, you can show your “baseball” card, which lets you show off your Dex sales stats, etc.

A food related website.  Lists recipes, lets users rate them, comment, etc.  As a user, you can add this recipe to your “Favourites”.  Recipes can have back-stories, you can add photos and videos (great for folks like me who need to see cooking happen to pull it off).

Lets you add ingredients from recipes to your “shopping list”, which is cool.  In the shopping list, you can view more information on that particular ingredient (alternatives, comments, good prices, etc).

People can add their own food related articles, like on “Cupcake Camp”.  Cool.  Users can respond to these articles.

“My Kitchen” is your central page/hub on Foodea.  Tells you about YOU, and what you’ve done.  Shows you your Favourites, your Cookbook.

Besides food, there are also areas for drinks!

There is a “Market Area”, for food related businesses (caterers, food products, etc).  These businesses can purchase profiles, which can be viewed and interacted with by the sites users.

Woop, and just as it started, it stopped:  no Internet access on the presentation Mac, all of a sudden.

“Try shaking the cable” yells someone.  Another yells “I blame the shitty DemoCamp set up” (he’s from Microsoft It turns out that he’s one of the guys who’s running the show).

Ok, back up and running.

Interesting in that it displays images in a mosaic.  The presenter mentions “inspiration” a lot…does he really mean “image theft”?  Just curious.

I like this feature: the “mood board”, which lets you group/arrange images together into a mosaic.  Reminds me of some notebooks I’ve seen from our designers in the Drama department.

I think I could use this.

There are some desktop applications provided to help you capture and upload images to ImageSpark.  Pretty cool.

Woop – some problems uploading.  I feel bad for this guy.  It’s a cool app, but his stuff is breaking.  Gremlins, probably.  He just said that they built it in 3 months – wow… pretty good.

There seems to be a lot of talk about “bacon” here.  I’ve heard two bacon related questions here.  Inside joke?  Geek humour?  Bacon’s great, but I have no idea what’s going on.

“Pizza” isn’t a presentation.  They’re serving it.  So I’m going to eat some.

Woop – spoke too soon, the buzzards are descending, and I’ll probably have to wait to get a chance at a slice.

Wow, I guess pepperoni and cheese just doesn’t cut it with this crowd.  Some pretty exotic pizzas here:  layer of veggies, layer of feta cheese, mushrooms, and a massive slice of ham on top.  Not bad.

Anyhow, back to the demos…

A platform to let developers track and optimize their social applications.

Whoa, apparently, a recent Waterloo dropout created a game on Facebook, released about 6 months ago, and is making 7 figures.  Holy smokes.  Apparently, this is pretty common, too.

Two things that Google Analytics doesn’t show you that Kontagen does:  How to filter by age, location, gender, number of friends, etc.

Privacy-wise, my hair is standing up, just a little bit.  Probably just a reflex.

Shows you “virality” – a statistic on how Facebook applications spread…  for example, on the demo that’s being shown, women are shown to see more viral on this particular application.

They’re apparently working with Google on integrating with OpenSocial, they’re funded by Facebook…they were 1 in 5 companies who won Facebook Funds money.

That’s all for the Demos…now for Ignite Presentations

Ignite presentation concept:  Standard slideshow presentation, but adds constraint:  20 slides, and the slides have to auto-advance every 15 seconds.

Hacker spaces…places in Toronto to do geek stuff, like hallways at a conference.

Hackerspaces.org:  How to create these spaces.

Lots of interesting hacker spaces all around the world.

There’s one in Toronto:  Hacklab.To

A location-specific nature haiku by SMS.  Cool – you send a text to 416-662-3408 telling it your location, and it sends you back a haiku about where you are.

Hilarious!  Already, I love this.  I’ve added it to my phone contacts.

It’s pretty interesting how this thing works – Python, and a pastiche of web-services (Google Maps, other geo-location stuff….).

Interfaces are changing over time.  They’re going towards “ubiquitous, wearable” computers (hey, my CSC301 group sort of wrote a paper on this!).

Remember the command line?  The behaviour that this enforces is one of recall – you need a wealth of commands in your head to make this thing work.  Plus, the response is disconnected from the input that you gave it.

Remember Douglas Englebart?  Mouse, keyboard, GUI, etc.  This was the next step after the command line (though command line can still rock, right Wolever?).  GUI gives back an indirect response; the mouse cursor moves, but now you’re proxied by your mouse.

This is a trend toward Gestural computing.

General tip:  little animations or “polish” on your interface qualifies as part of the interface affordance.  Don’t just write them off as showing off, they make the interface pop, and can help your users “get it”.

This guy is a good presenter – told a good story.  Got my attention.  It also sounds like he’s working with Andrew Louis.

And that’s the ball game!

And now…awkward networking with strangers. 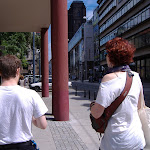 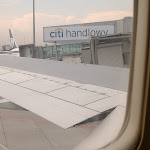 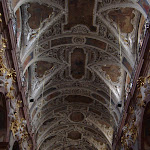