This day started out amazingly.  First, Tamara handed us our second 200z installment of cash.  Second, she told us that besides seeing the festival show that evening, the rest of how we wanted to spend our day was up to each of us. 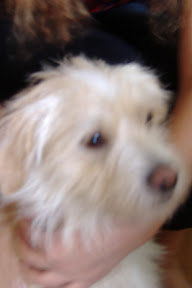 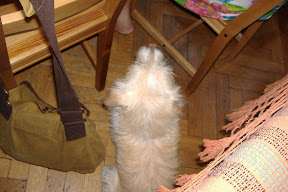 So, while chewing on some bread with jam, and playing with the Wrotswog the Hostel Dog, I mentally went over my to-do list:

So, I slammed down my toast, got cleaned up, walked out into the warm and humid Wroclaw air, and hit the streets with a few others.

As usual, our feet eventually led us to the market square.  On one street, with large stone spheres as dividers, some booths were set up where people were hocking their wares. 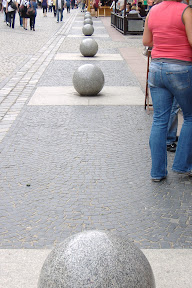 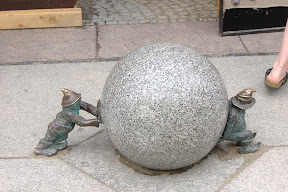 There were lots of little knick-knacks, but I actually didn’t see much that I hadn’t seen at other similar markets in Toronto.  I was looking for gifts that were unique to the area, and it took me a while to eventually find them.

Here’s a shot of us checking out some wares: 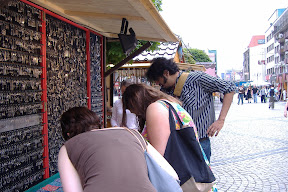 One highlight was a booth where a German man was selling hand-made wooden puzzles.  He was a good salesman (though I’m pretty sure he was hitting on Linn the whole time), so I bought one of his puzzles.  If you’re interested, and you read German, here is his website.

Here we are trying to solve some of his puzzles: 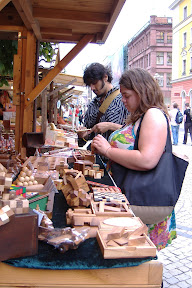 After a bit more shopping about, we decided to get some lunch.

I was about to get my first plate of pierogi since landing in Poland, and I was starving.  After glacing at the menu,  I ordered “pierogi ruskie” (basic potato, cheese, and onion pierogi), and a Sprite.  Linn was upset because the waiter told us that they were out of the meat pierogies, and didn’t have any without cheese (Linn is lactose intolerant).  So, she ordered fries instead. 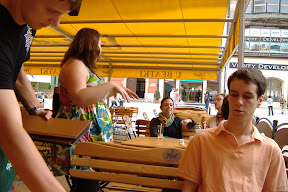 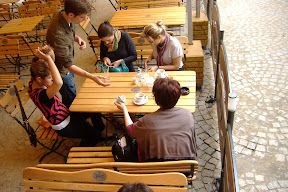 Her fries showed up.  Our pierogies didn’t.

Something like 30 minutes passed.  Eventually, the waiter came back and told us that they were fresh out of pierogies.   Devestated, and famished for real Polish pierogi, I finished the rest of my Sprite, and we decided to try someplace else.

Ironically, Linn was the only one who ended up getting a meal there.

We found another restaurant that looked good, and sat down.  Unfortunately, there were no pierogies on the menu (was there a pierogi shortage?  In Poland?  Impossible!), so I ordered “penne spinaci”.  It was relaxing, sitting out there in the market square under the tent.  A couple of musicians with guitars and accordions played for us.  We got into a conversation with a local.  It was heavenly.  And it felt good to know that there was no rush to do anything – we could play the day however we liked.

And that’s pretty much how the afternoon went – we’d go to some restaurant, sit down, eat and drink for an hour, and then wander around until we got hungry and found another restaurant.  It was awesome.

It was also during that trip that Ryan and Jiv found what we would eventually name “Wizard Hat” – a bar near the Wroclaw University that sold 5z pints of beer.  This would eventually become one of the main watering holes for our group while we were in Wroclaw. 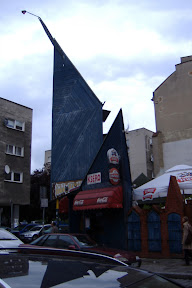 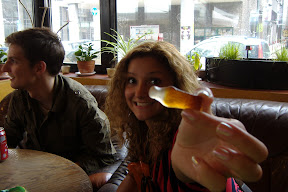 After chewing on some of the gummy candies that Tara had bought at some booth in the market, I decided to head back to the hostel on my own to see if I could find a way to call home.

Outside of our hostel was a convenience store, and somebody in our group had told me earlier that I could get a phone card from there.  So, I walked inside, and (after a lot of gesturing) was able to purchase a 20z “card” (really, just a receipt with a code on it).

So, I walked back up into the hostel, borrowed the hostel phone, and after some trial, error, and help from Tamara (the instructions were all in Polish!), I managed to phone home.

And nobody was there.  Nobody was at my girlfriend Em’s place either.  So, I put it on my “to do” list to try calling again that night after the show.

Putting back the phone, I walked into the common room, where the BBC was reporting on events in Iran.  Riots on the streets, total news blackout (except for social media)…our group watched the news in Iran carefully, especially Tara, who had planned on visiting there after Poland.  It wasn’t looking good.

A few hours passed.  There’s a gap in my journal, so I don’t really know what I did.  All I know, is that at 6:13PM, I was in a theater about to see TEBEK-JARAN (“The Stabbing of the Horse”) by the Gambuh Desa Batuan Ensemble; a Balinese troupe.

So how was The Stabbing of the Horse?

Hypnotic.  I found a YouTube clip posted by someone who was recording the show.  Check it out:

It’s really quite fantastic what she’s doing with her body – very precise, very controlled.  It was impressive.  The whole company moved like this.  It was really other-worldly…I felt like some kind of scientist watching an alien ritual.  Quite incredible.

But, at the time, I have to admit my eyes got pretty heavy after about 20 minutes of that music and movement.  I didn’t understand the language at all, and had no idea what was going on even though they’d handed out a piece of paper explaining the story.  Plus, it was super warm in the theatre.  I won’t lie, I had to struggle to stay conscious.

And then they brought out the horse!  Which was awesome – it was clearly just some actor in a horse costume – but it was freaking hilarious.  The horse came out, played with the audience for a bit, and that perked me right back up.

And then they killed it. They stabbed the horse, my favourite character, just as it was getting good.  But I shouldn’t have been surprised – the title of the show was The Stabbing of the Horse.  What did I expect?

Hrmph.  Maybe if I knew more about the culture, I would have gotten more out of the performance.  Oh well,  I gave it my best shot.

After the show, Tamara gave us the option to see a performance of Macbeth.  Personally, I was completely drained from the last show, and decided to head back to the hostel.

Back at the hostel, I successfully called both my parents and my girlfriend Em.  It was good to hear their voices, and totally crazy to think that it was only 3PM back home.  It was like time travel.  My mind boggled.

Eventually, we met up with the people who saw Macbeth – and apparently, it was incredible.  I’d write more about it, except that I didn’t see it.  But according to them,  it was awesome.

After we met up with them, a few of us stopped by a Greek restaurant for some gyros.  We discussed the shows a bit, and I heard more impressions about Macbeth.  After our discussion, we left, and started heading back to the hostel.

We were just walking through the middle of the market square, when all of a sudden, it hit me:  I didn’t have my camera on me.  I’d forgotten it at the gyro restaurant!  I peeled out, and flew back to the restaurant.

The restaurant was empty – it looked like they were about to close.  And my camera was nowhere to be seen.  Finally, the European thieves and pick-pockets that I’d been warned about had struck.

And then the manager came out and gave me my camera back.  I felt like quite a shmuck.

After thanking the manager, I left the restaurant, and ran smack dab into another group of my fellow travelers who had taken a different route back from Macbeth.  They were hungry, and I was up for hanging out, so we stopped at another restaurant.  This one was a fancy Italian place.

Have you been keeping track?  Let’s count how many times I sat down to eat that day:

So there we were:  Jiv, Ryan, Una, Linn, and Sonia, sitting at this fancy Italian restaurant, being loud and obnoxious, as per usual.  It took us about 20 minutes to finally realize that we were sitting in a restaurant geared towards romance, and that many of the couples around us weren’t appreciating how much noise we were making.

So we paid our bill and left.

And we went home.  And slept.  I hadn’t bought any postcards, and I still had laundry to do.

Oh well.  Plenty of time for that.

Click here to go to Part 7:  An Official Tour of Wroclaw

Click here to go back to Part 5:  Exploring Wroclaw