During breakfast, I found out that it was another free day – once more, Wroclaw was our playground to romp around in independently, followed by another version of Hamlet (HAMLET. SILENCE FROM THE BODY by Roberto Bacci) that night.  It was also our last night in Wroclaw – we were going to leave for Krakow early the next morning.

The deal was even sweeter when Tamara handed us a 250z cash-infusion.

So what did I do?  Did I hit the town, and eat at restaurants?  Did I go sightseeing?  Did I go shopping?

Actually, I did laundry.  Yep, I had accumulated quite a collection of dirty laundry at this point, so I stayed back at the hostel, and slammed some dirty clothes into the washing machine.  While waiting for my clothes to get washed, I hung out in the hostel kitchen with Chantelle.

While talking with Chantelle, I learned that a few of the ladies in our group had noticed that men in Poland were a lot more obvious when “checking out” the women around them.  Chantelle told me that a few of them had even felt uncomfortable at times, and that it was almost as if some men wanted them to notice.  I told her that I wondered if it was just a European thing, and she said that she didn’t know.

I also took a time out to play with the Hostel Dog: 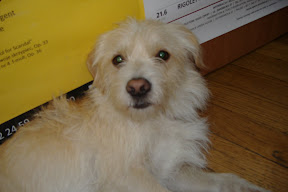 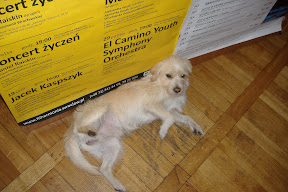 With my laundry air-drying on a clothing rack in the hostel, I eventually left to go exploring on my own. 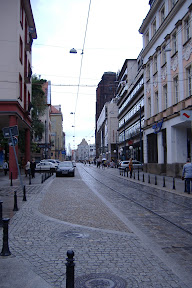 It was chilly, rainy and grey out.  I also wasn’t sure where everybody was – we seemed to be all scattered about.

I eventually bought some postcards and a calling card – I was going to call Em later on that day.

I ran into Tara, Tom, Alex (or was it Alexi? My writing is a bit sloppy), Sonia, Ryan and Jiv at the milk bar we had originally seen during our tour of Wroclaw.  I had something to eat, and then we all left together.

Eventually, Ryan, Jiv, Alex (Alexi?) and I split off and walked through some of the small artisan shops.  We talked with a shopkeep, who told us about a major flood in Wroclaw that had happened about a decade before.  Apparently, flooding in the area was quite common.

We thanked the shopkeep, and left.

Somehow or another, I had gotten back to the hostel, and started writing postcards.  I also took the opportunity to call my girlfriend Em, and tell her how I was doing.

After the phone call, I felt a little Wroclaw-ed out, and felt I needed some downtime to recouperate.  I went into the common room and watched some BBC News.

Finally, I got up, and went out again for something to eat with Tom, Tara, Ryan, Alex, Una, and Linn.

If it hasn’t become clear already, the bunch of us became expert restaurant-hoppers.  Choosing restaurants, however, could be a bit of a chore.  Often, there were times where we’d travel the entire square several times before deciding on something we could all agree upon.

And for that night, the restaurant was a Greek place called “Ready’s”.  This is what my guidebook says about that restaurant:

Paper napkins and plenty of plasticky bits and bobs greet you in what rates as a very poor man’s Sphinx.  Eating is just a means to an end here, with plates of kebab meat, fries and chicken being the core dishes.  You may enjoy Ready’s, but only after a dozen beers.

Maybe it’s my attraction to no-frills stuff, but I enjoyed this place.  I’d eat there again.

In fact, we were enjoying our meal so much that we lost track of time!  We paid our bill, rushed out, and tried to figure out how to get to the theatre to see Bacci’s HAMLET.

After a failed attempt at walking to the theatre, we decided as a group to try to take a cab.  Eventually, we were able to hail one down, but only four of us were able to take it.  After a quick discussion, Ryan, Alex, Una and Linn hopped in, and the rest of us tried to hail another cab.  Tom, Tara and I were doubtful that we’d make it.

Luckily, we were able to hail a cab.  After flailing some arms, and gesturing wildly at our maps, we were able to communicate to the driver where exactly we wanted to go.  I think he knew we were in a hurry, because he floored it.

HAMLET. SILENCE FROM THE BODY Directed by Roberto Bacci

When we got inside the theatre, the show was just about to begin.  There was no seating left, so I sat in the aisle.

The lights came down, and the show started.

This version of Hamlet was spoken in rapid-fire Italian.  There were English and Polish subtitles projected on a surface above the stage.  Half-way through the production though, the English subtitles stopped.  They just stopped coming.

I think this was a good thing though, since it allowed me to focus on what I was seeing and hearing on stage, as opposed to flicking my eyes up to the screen every few seconds to get my place in the story.

So what did I see?  This version of Hamlet had the cast (with the exception of Hamlet himself) dressed in fencing armor – masks and all.  I thought the masks helped them pull off some nice sleight of hand, since it allowed them to “dissappear” characters into the anonymous chorus, and have them re-emerge elsewhere.  Actual fencing was performed on stage as well, which was exciting to see.

The stage was panelled in wood, giving it a very red, and earthy tone.  The major set piece was what appeared to be a large, rusty frame or scaffolding, somewhat like a jungle-gym.  This apparatus was climbed upon, walked through, and even had “drawbridge” doors on either side of it.  It was a neat contraption, though I was worried for the actors safety when they were climbing it at some points, since it seemed to have a very high centre of gravity.  I also wish they had used it more – it seemed to have a lot of potential.

The acting was decent.  I had a conversation with Tom about the show afterwards, and we seemed to agree that this was a pretty “meat and potatoes” Hamlet.  It did the job of telling the story, and it told it pretty well, but nothing blew our socks off.  Tom said that Bacci’s Hamlet was “like a Soul Pepper production, if they had hired a kind-of experimental director.  Pretty strong, but nothing special.”

Click here to go to Part 10:  Journey to Krakow, Wawel Hill, and The Dragon

Click here to go back to Part 8:  A Boat Ride, Eating, Videos, AJAX, and More Eating 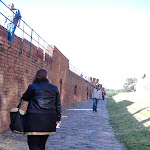 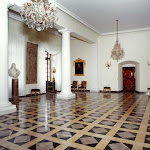 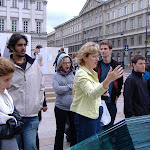