As usual, I woke up, grabbed a shower, and headed down to breakfast.  The routine was really starting to sink in.

Breakfast was yogurt, croissants, and granola, with little cakes.  Very tasty.  And the weather?  Gorgeous as usual.

After breakfast, we were underway.  There was lots of talk about features in the upcoming version of Thunderbird.  There was a long talk where we batted around ideas on how to reward contributers to Thunderbird.

I got a lot done that day – I’d been having some trouble getting Ubuntu Natty running on my laptop virtual machine, and I finally got it going.  I kicked off a Thunderbird debug build, and got the globalmenu extension I was tinkering with compiled.  I had a segfault to solve, and I dug into that.

Around five, we broke for dinner.  Everybody was going to different places, and I chose an Italian restaurant called Il Lupino with Karen, Gozer, Shane, and Mark Banner.  The restaurant was new, and seemed like they were still getting their act together.  It seemed like there were a lot of waiters standing around not doing much, and only one or two staff running around doing a whole bunch.

It was a bit of a wait, but they fed us bread.  Eventually, dinner arrived, and it was tasty.

After dinner, we walked back to the hotel along the beach.  It was a nice, cool night.  There was a super fine mist in the air, which I gather is the Hawaiian version of a light rain.

When we got back to the hotel, a bunch of people were playing XBox in the meeting room.  I watched for a bit, played a few rounds, and eventually called it a night.

I headed up to my hotel room, and started getting ready for bed.  As I was brushing my teeth, I noticed something strange about my bathroom.

The bathroom was divided up into two sections.  One section had the sink, a big mirror, and a bathtub.  The other section was where the toilet and the standup shower were.  The sections were divided by a doorway that didn’t have a door to go with.

Or so it seemed.  On closer inspection, it turned out there was a door to go with the doorway.  It was a sliding door, like one might have to out onto a back patio, and it was recessed into the side of the doorway.

I was curious, so I pulled it out to take a look at it: 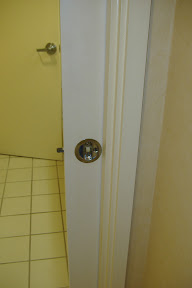 The only feature on the door was a little metal plate for sliding it back and forth: 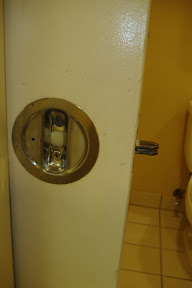 And you’ll notice that in the center of the little metal plate is a white button.

I’m a naturally curious guy, and I wanted to see how the locking mechanism worked.  So I closed the door, and pressed the white button.

It only took me a few seconds to realize that there was no way to un-press the white button. I had just trapped myself into the toilet/shower side of the doorway.

At first, I thought this was really funny.  What a stupid design for a door!  After a few seconds of laughing at myself, the gravity of my situation started to sink in:

It was a sticky situation.  Not life-threatening by any means, but quite a predicament nonetheless.

So, after thoroughly examining the lock, my first step was to take an inventory of my tools:

I decided to attack the lock with my belt.  I rammed the swing-arm on the belt buckle into the area between the white button and the metal plate, seeing if I could make some room on either side of it.  I ended up working away some of the plastic on the button, and was able to make some space.

Ok, so now I could wiggle the button back and forth.

Continuing with my belt, I tried to “scoop” the button out – but the plastic was too slippery, and I didn’t seem to be making and progress.  And, at some points, it seemed like the button was going farther in, and I really didn’t want to make my situation any worse.

I switched tools, opened up my change wallet, and pulled out two dimes.  My fingers were too big to pinch the button and pull out, so I tried using the dimes.

It was starting to get hot in there.

With one dime pinched in each hand, I worked them like the world’s most awkward tweezers.  I grabbed the button, squeezed inwards towards the button, and tried to pull out.

The button was slick, and the dimes kept slipping off.  It didn’t look good.

Suddenly, I had a good grip on the button, and the dimes pulled it out.

I fist-pumped, slid the door open, and enjoyed the cool air.  I’d been trapped for about 25 minutes.  It was good to be out.

And then I took some photos.  Here’s a shot of the toilet/shower room just after I escaped: 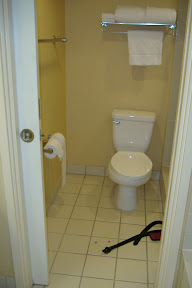 and here’s a shot of my trusty, if clumsy, tools: 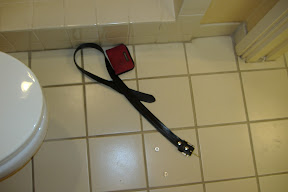 I went to bed pretty exhilarated.  I was looking forward to telling everybody about this at breakfast the next morning.