I woke up after a night of fitful dreaming about long airplane rides, dip masquerading as hummus and missing socks.

I only had myself to blame for the socks.  Em had awesomely helped me pack two weeks worth of clothes into a carry-on bag, and the socks had been my responsibility.  Sigh.  Oh well.

It was early at this point.  Too early.  I glanced at the bedside clock…6 AM.  It’d been a long time since I’d been up this early.  And yet, strangely, I felt fully rested.

Fully rested, and excited.  I was in Hawaii, baby!

I was determined to make the best of the early morning, and watch the sunrise.  So, I scrambled around, getting dressed – during which, I got a few shots of the sun starting to rise through my hotel room window. 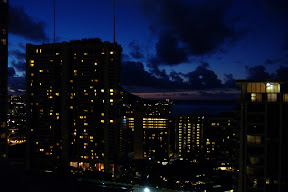 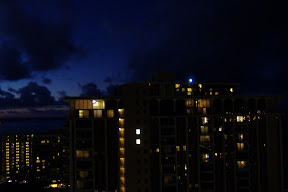 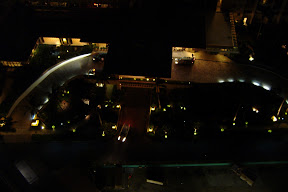 It was time to hit the pavement.  I threw on my sandals, and stepped into the elevator.  I tried not to think about my sock problem.  I figured I would spend most of my trip in sandals, so the lack of socks really wouldn’t be an issue until later on in the trip.

The hotel was pretty close to the beach, but the sun was coming up fast, and I didn’t want to miss it.  I started jogging, flew past the Hilton lagoon, and made it to the beach in time to take these shots: 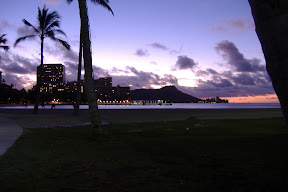 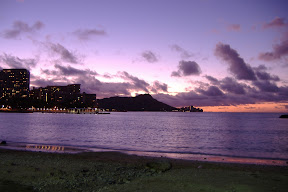 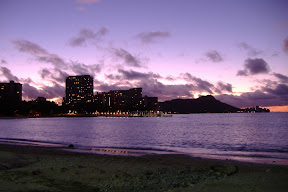 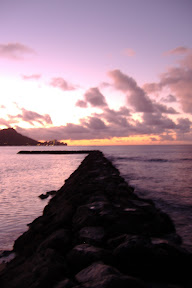 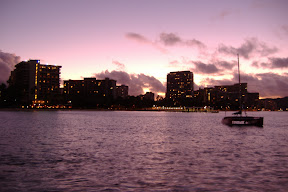 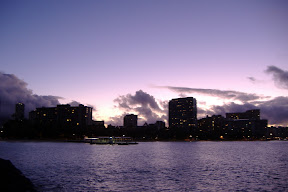 It was very peaceful and serene. 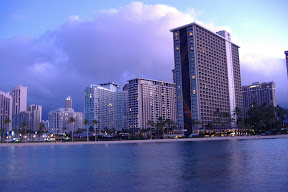 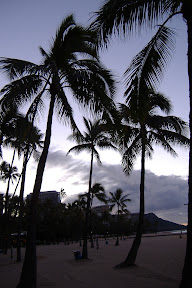 Before going back up, I took a few minutes to walk around the hotel.  There was a nice decorative fountain near the entrance, as well as a Kona Coffee shop. 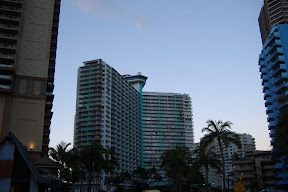 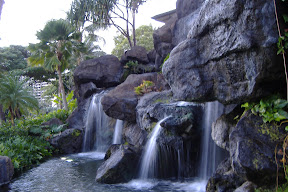 I’m not a big coffee drinker, but apparently Kona Coffee is a pretty BFD.  Before I left home, my Mom asked me to bring a few bags back.  I didn’t have a chance on this morning though – the Kona Coffee shop was closed: 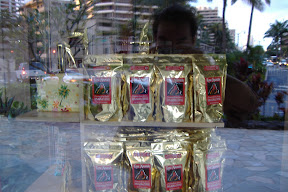 I eventually made it back to my room to grab a quick shower and shave before the 9AM breakfast.

The hotel we were staying at was the Ilikai Hotel, which is featured in the opening to Hawaii Five-O.

The hotel didn’t want you to forget that either – they were pumping episodes of Hawaii Five-O through some flat-screens near reception, 24/7.

Along with the hotel rooms, the Ilikai was also providing a meeting room for the team for the week.  The meeting room was also where breakfast and lunch would be served.  It was a pretty awesome arrangement.

Here are some shots of the meeting room. 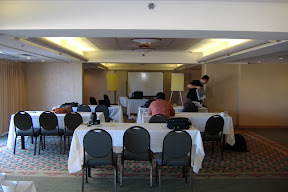 We’ve got a patio outside too, in case we decide that we need to have a meeting in the sun: 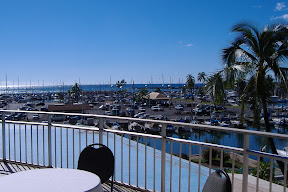 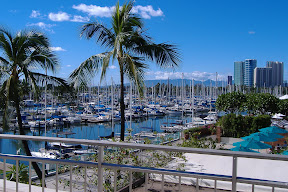 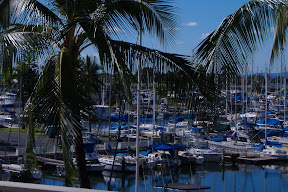 When I got to the meeting room, there were already a bunch of people there, and I went around and said a lot of hello’s.  Once again, a lot of names and faces flew by, and it was hard to keep them all straight in my head.

Breakfast was yogurt with granola, and what appeared to be banana bread.  Delicious.

After breakfast, David Ascher gave a talk about the mission of Mozilla Messaging, and what we’d accomplished in 2010, and what we were aiming to accomplish in 2011.  There was a nice and easy, accessible vibe in the room, and I don’t think it was just because everybody was wearing Hawaiian shirts – the whole crew just seemed to gel that way.

After the talk, we more or less figured out the schedule for the rest of the week.  That day, we’d be doing a bunch of demos.

The demos were pretty cool.  Blake did one on the account provisioning service that he’s been working on for Thunderbird:

And then showed off some more experimental work that he and a few others been doing on a project called Thunderbird Air.  Think of Thunderbird Air as a jam session for ideas about messaging interfaces.  It’s pretty cool.

Then, we got a demo of F1, MoMo’s shiny new Firefox add-on that makes sharing stuff easy. It’s pretty badass.  Here’s an early video showing off what F1 does:

After that, Andrew Sutherland gave a talk on the new widgeting library he was working on called WMSY.

Afterwards, there was a big talk about mail storage with David Bienvenu – one of the original developers of Thunderbird.

After that, it was lunch break.  Salad and sandwiches.  Very tasty.  There was also some peculiar bread that had a sweet taste and was blue/purple inside.  Very interesting.

After lunch, people just hacked on their laptops for a bit, and chatted.  Smaller discussions about other projects broke out.  People went out onto the patio for sun.  Very relaxed and casual.  Eventually, someone plugged in the XBox and the Kinect, and we watched David Ascher and Dan Mosedale do some extreme white-water rafting.

Eventually, things wound down.  Old habits die hard, and the group started to fold around 5PM.  At that point, I packed up my stuff and headed back to my room.  I talked to Em on Skype.  I got ready for dinner – I’d be meeting the rest of the group downstairs at 6PM. 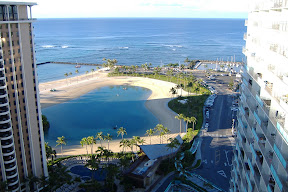 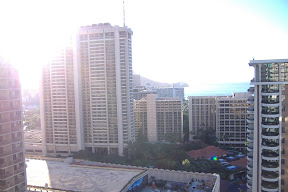 I showed up at the lobby just in time for Sancus to tell me that we were meeting at 6:30PM instead of 6PM.  That gave me just enough time to run around and try to grab a few photos: 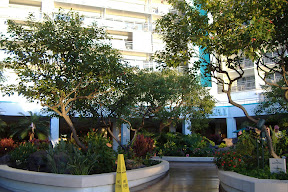 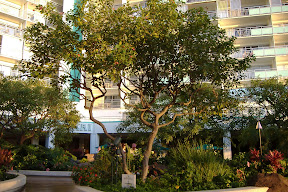 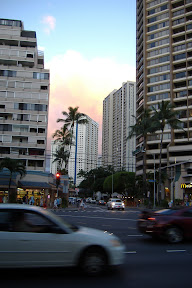 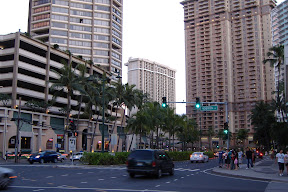 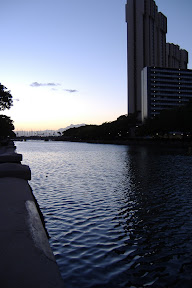 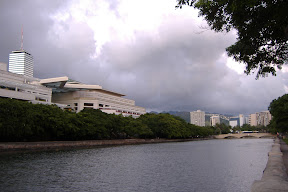 I got back to the lobby just in time to meet the group as we started to head to a restaurant called “Uncle Bo’s“. Apparently, it’s pretty well known in Hawaii.  The food was eclectic, but tasty.  I spent most of dinner talking with James Burke, John Hopkins, Mark Banner and David Sifry about things like British humour, Top Gear, and trolling Nigerian prince scammers.  Good times.

I didn’t take photos during the dinner (at this point, I still didn’t know everybody, and would have felt weird photographing them), but I know Roland Tanglao did.  Here are a few: 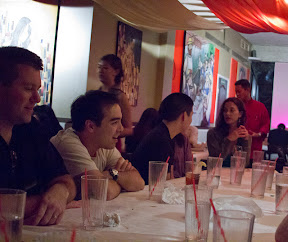 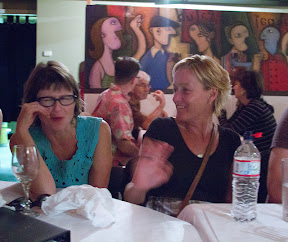 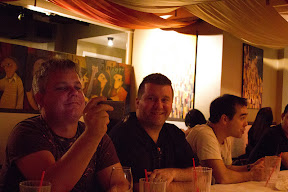 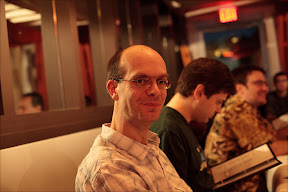 Stuffed, we cabbed back home.  Some of the team was headed to a patio on the beach, and I tagged along.  As some live music played, I talked school and science fiction with Andrew Sutherland and Gozer.  I also found out that Gozer is a pool shark, and we decided to find a time to hit a pool hall sometime over the week.

At some point, a wave of exhaustion hit me, and I decided to head back to the hotel.

I made my way back to my room, jotted down my daily notes, and nodded off.