Note:  As I’m writing this, I’m sitting in a hostel in Warsaw.  It’s 5AM, and the cable to connect my camera to a computer is buried at the bottom of my backpack.  So, while there are photos to go along with this story, they’re going to have to be added later.

I’ve been to Pearson Airport in Toronto a few times before, but only ever to pick up some passenger after they’ve come back from a trip.

I’ve never been one of those “departure” people.

Well, today was my day.  And man, it was confusing.

It started off smoothly enough.  My Dad, girlfriend Emily, and her sister Cassie, had brought me to Pearson to see me off.  I was able to get my boarding pass from a machine (which was nice and easy), after finding fellow passengers Reid, Anj, and Olya.  What a relief to see those three, because I honestly had no idea where I was in the airport, and had no idea what was going on.  Pearson is huge, and I was only in Terminal 1.

After our goodbyes, I stood in a line to get my carry-on bags scanned.

That was my first mistake.  Wasted 20 minutes getting to the front of that line, only to find out that I had to go to another line somewhere else in the airport to check my stowed luggage.  So there was some momentary panic while I raced around the airport, trying to find the right place.

So, lesson one:  it’s always OK to ask when you’re way out of your element, and it usually makes things go faster.  I knew this already, but this was a clear-cut example.

After some more running around, and a trip along a few moving sidewalks, I made it to our departure gate, where Olya, Reid, and Anj were already waiting. 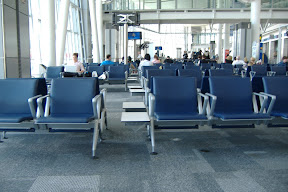 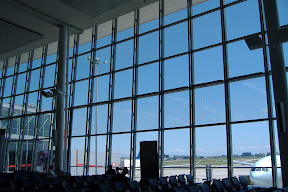 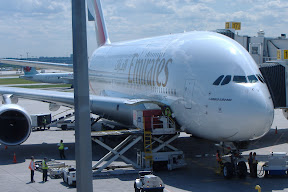 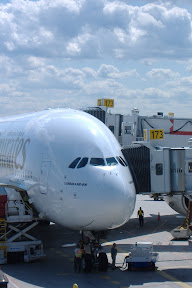 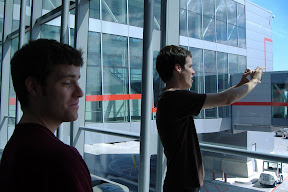 Eventually, the rest of our comrads showed up.  And now, for your edification, here’s a list of the UCDP people who were flying with me that day:

After a lot of sitting around and waiting, we board our flight.  After even more waiting, the plane begins to move.

Our plane took off at exactly 6PM EST.  We were half an hour behind schedule.  Already, my companions were taking bets on whether or not we’d miss our connecting flight from Frankfurt (not Brussels, sorry!) to Warsaw.  We only had 50 minutes once we had landed in Frankfurt, so it was going to be tight.

Anyhow, we’re in the air.  And I’m excited, of course.  I haven’t been in a plane since a flight to Toronto from Miami in 2004, and I sure as hell haven’t flown outside North America.  This was going to be a new experience for me. 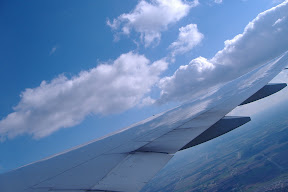 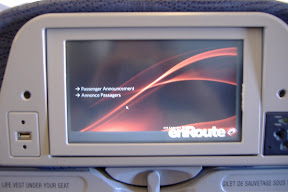 It didn’t take long for three minor disasters to happen:

The flight was mostly eventless.  Besides some minor turbulence (which freaked out one of our more sensitive flyers), there wasn’t much to do.  My Dad had let me borrow his noise-cancelling headphones, which were awesome.  I listened to classical music on XM radio while I wrote my notes.

Food started making its way down the aisles, and it smelled pretty good…

But then we hit a patch of turbulence.  One of my companions is really not into flying, and so we consoled them while the plane shook around us.  The calming thing was that the flight attendants looked calm as ever, and kept handing out food.

I chose the pasta.  And a Canada Dry ginger ale. 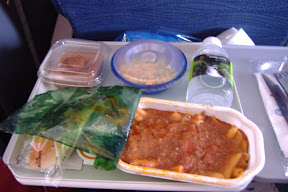 I hear a few of my comrads are already taking advantage of the free beer/wine/spirits on board.  Hilarity ensues.

Great meal.  Pasta in tomato sauce, a bun, some veggies in dressing, and chocolate mousse for dessert!  Felt very pampered and content.  Was reminded again of this Louis CK video.

And it’s even better knowing I haven’t paid a cent for it!  Free always tastes better…

Around this time, I figured out that the in-flight mapping system wasn’t working, and I had no idea where we were.

I trusted our pilot knew where he was going.

Also around this time, Yev started saying that the shadows were getting longer…the sun was going down…the shortest night of my life was coming.

I’m reminded of a scene from 2001: A Space Odyssey – the scene near the beginning (after the ape fights), where a character is flying to a space station.  Our flight feels futuristic.  Maybe it’s the lighting.  Maybe it’s all of the video screens winking at me.  Maybe I’m just over dramatizing it. 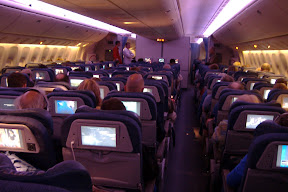 At this point, I’ve decided that I’m bored, and that I’m going to watch an in-flight movie.  After some deliberation, I choose The Watchmen, which I had already seen, but didn’t mind watching again.

It was pretty dark outside our windows at this point.  Yev seemed to think that we were over Greenland, but how she could tell that through all the cloud cover, I have no idea.

I kept watching the movie.

At this point, I decided to get up and walk around a bit.  I stretched.  Our trip to Frankfurt is about half over.  So is The Watchmen, for that matter, but I decided to try to sleep instead of finishing it.

I had no luck sleeping at all, despite amazing noise-cancelling headphone technology.  I rolled about.  I chatted with my travel mates.  I listened to music.

It was starting to get light out outside.  The sun was coming up.

I don’t think anyone slept that much during the flight.  I saw a few people dosing, but that was it. 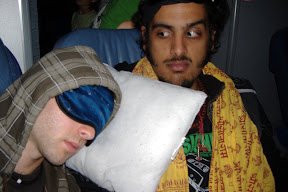 I knew that I’d have to stay awake for as much of the following day as possible, so it was a bit discouraging to be unable to sleep.  I pretty much figured I’d spend most of the next day in a daze.

Breakfast arrived, and according to Yev, we were flying over land again! 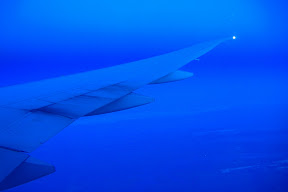 Breakfast is a muffin, yogurt, and orange juice.  Nice. 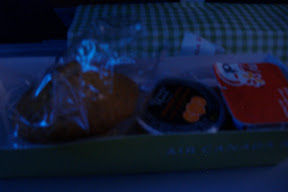 Muffin was good, but non-descript.  No idea what flavour it was, but I liked it.

When they brought the food, I asked the flight attendant what land we were flying over.  He said he had no idea, but that we would be landing in about an hour.

Maybe if I knew how fast we were going, I could figure out where we might be.

I found it strange that the captain never really addressed the passengers.  Never told us the route, altitude, speed, etc.  Things are changing, I guess.

It was almost midnight back home, and the sun was rising where we were. 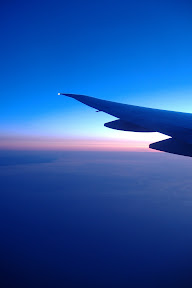 I had no idea what time it was.  My body felt very confused and disoriented.  I felt like I’d been up all night, and I guess I had been…all 3 hours of it.

We began our descent around here.  Phase 1 of our journey was about to end.

Why do all pilots sound the same?  Always with that croaky voice… or maybe it’s the microphones that they use.

Lots of turbulence going down, but it was a smooth landing.

I still hadn’t adjusted my watch yet, and that was starting to freak me out.

So, the main event was that we missed our connecting flight from Frankfurt to Warsaw.  We were about 20 minutes too late.  50 minutes is not even close to enough time to get processed at the Frankfurt airport. 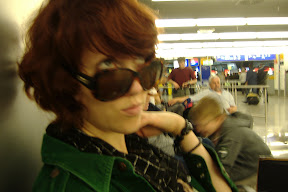 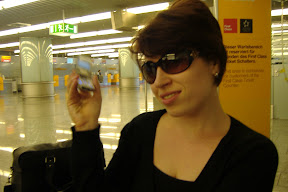 So Frankfurt airport was my first taste of Europe.  My impressions?  Honestly?  Not that different.  I didn’t feel like I was in a foreign place, really – except I couldn’t read any of the advertisements.  Everything else had English attached, so that was nice.

After some chit-chatting with Air Canada, we were booked on a later flight.  There was a lot of running around, lots of in-between-destinations stress, and we almost missed that flight too.  But we made it. 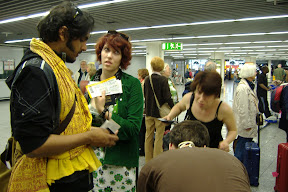 A couple of casualties though:

The plane we took from Frankfurt was much, much smaller than the one from Toronto.  It was only going to be flying for an hour, and it looked like a lot of the passengers took this trip every day.  I tried to nap on the plane, but no luck.

We were on route to Warsaw.

We were served some kind of cheese sandwich for our in-flight meal, which was good.  Really wasn’t sure what was in it, and sure didn’t take a picture.  Why?  I was starving.  Scarfed the thing right down.  Hadn’t slept, hungry, grumpy.

There was lots of turbulence in the smaller airplane.  Pretty shaky.  Kinda scary.

I wiped my face with a lemon scented wet-nap to wake myself up, and had a cup of tea.

Eventually, I got into a conversation with the lady sitting next to me about theatre.  She was a Bulgarian business-woman going to some sort of seminar.  We talked about Poland, sight-seeing, and Bulgarian theatre.

And then we landed.

And we were in Poland.

Click here to go to Part 2: Dazed in Warsaw